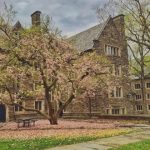 "I was immediately impressed by your professionalism and knowledge of the American and British university field", says our client who, thanks to the help of UNI Student Advisors, was admitted to the prestigious Princeton University, at the top of the “U.S. News & World Report” (https://www.usnews.com/best-colleges/rankings/national-universities) ranking of the best universities in the United States, as well as prestigious British universities.

Princeton University admits only about 5% of students applying. That year they received 35,370 applications of which only 1,941 were accepted. Thanks to the advice of UNI Student Advisors, Bianca's daughter is part of this elite!!

Our CEO & Founder certainly played a very important role in this admission as he took the responsibility of advising Bianca's daughter to apply to Princeton in Early Admission instead of Pomona. The following are the girl's thoughts on the matter: “Applying to the best university in America with my SAT grade seemed crazy to me, not to mention that I didn't have time to prepare the application material since I was busy studying for another exam. But you conducted a long research that you explained to me in detail during the meeting: according to the CEO, I would have had more chances at Princeton for many reasons, which were detailed rigorously and clearly in our meeting...”

Bianca's daughter was also guided in the preparation of the personal statement and the various essays that she had to prepare, which are fundamental for admission. She had the opportunity to establish a direct relationship with the advisor who followed her and advised her on which topics to choose for her essays so that she could make the most impact on the admissions’ committee.

Top colleges such as Princeton also require an interview with applicants, and in this aspect UNI Student Advisors assisted Bianca's daughter in the best possible way, as she also says: “Your support in preparing for the interview was very useful. You organized a mock interview to practice with your college counsellor" ... "Without the advice of the UNI Student Advisors team, I would have prepared an interview like a formal exam and perhaps missed the opportunity”.

Aside from the excellent results for America, Bianca's daughter also wanted to go through the process of being admitted to the UK, and regarding the differences in our approach to English applications compared to American applications, she says: "The UNI Student Advisors team has guided me in doing things with a different approach, a bit more formal and academic, literally, as required by British colleges. The structure of the applications and the elements of which they are composed is different from those in the USA."

Bianca’s daughter was admitted to Princeton, ranked #1 in the USA for undergraduate courses, despite 36,000 applications and 5% admission rate. Besides Princeton, she was also admitted to some of the best universities in the UK.
https://www.unistudentadvisors.com/testimonials/the-best-in-america-pricenton-university/